The 2006 national champion D.C. Divas women’s football team was invited by DC Mayor Anthony A. Williams to attend his weekly briefing on August 9, 2006. Williams invited the team to the briefing so he could personally congratulate the owner, coaches, general manager, and players of the D.C. Divas, who last Saturday night defeated the Oklahoma City Lightning to win the National Women’s Football Association (NWFA) national championship.

In their sixth season of play, the D.C. Divas finished with a perfect 11-0 record on the season, featuring the NWFA’s top-rated defense.  Mayor Williams praised the Divas’ championship season, saying, “Congratulations to the D.C. Divas! I’m proud of all of DC’s athletic teams, but I’m especially proud that some of these Divas are employees of the District government: from a firefighter to a police officer to a school teacher.  They deserve our thanks for their dedication to the sport and their commitment to their team.” 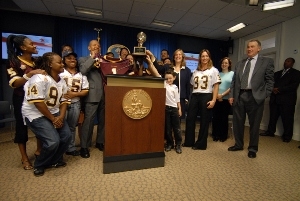