Maryland Governor Robert Ehrlich honored the D.C. Divas in a ceremony on the steps of the Maryland statehouse on August 25, 2006. Ehrlich praised the Divas’ undefeated season and their victory in the 2006 NWFA national championship game.

The former Princeton linebacker took pictures, chatted, and signed autographs with the team and was given the title of an honorary D.C. Diva. The Divas brought Ehrlich a personalized D.C. Divas jersey. “I would like to thank this tremendous team for making me an honorary D.C. Diva,” Governor Ehrlich remarked. “This jersey will be framed and will take a special place in my office.”

“Governor Ehrlich is a tremendous believer in what athletics can do to not only benefit the individual and the team, but in this case, the entire state,” Rich Daniel, general manager of the D.C. Divas, said. “We are thrilled the governor is on our sideline.” 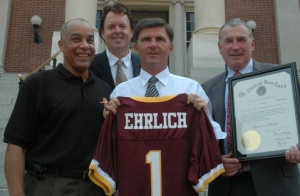 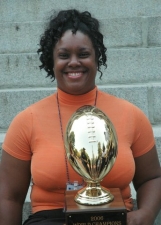