Ezra Cooper, one of the greatest coaches in women’s football history who helped build the D.C. Divas into a national powerhouse, passed away in his home on October 26, 2013, of a heart attack. Cooper was just 39 years old.

Known affectionately as “Coop,” Coach Cooper was hired in 2001 as the first head coach of the D.C. Divas. Cooper was a local DC product, a graduate of Yorktown High School in northern Virginia and Shepherd College, a West Virginia school located about an hour outside of DC. He was relentlessly passionate about football even as a high school player. On Friday nights, Cooper would suit up for Yorktown High at offensive guard, and at halftime, he would stay on the field, strap on a bass drum, and perform with the school’s marching band.

That desire to serve his football team in any capacity necessary would come in handy as the head coach of the D.C. Divas. As the first women’s head football coach in Washington, DC, Ezra Cooper was responsible for introducing the entire national capital region to the women’s game. He took a collection of women, all of whom had never before played full-contact football, and molded them into a team of winners. In doing so, he showed skeptical observers that the D.C. Divas – and women’s football in general – were for real, that women could seriously play a brutal, physical game…and play it well.

Cooper’s first D.C. Divas team in 2001 was slow out of the gate, finishing with a 3-4 record. Cooper would never again suffer a losing season as the Divas’ head coach. While simultaneously serving as a high school defensive line coach at his alma mater of Yorktown High, Cooper spent every spring and summer for eight years building the Divas into champions.

That building process really took off in 2003, when the Divas won their first of five straight division titles under Cooper. Then came the first of four consecutive undefeated regular seasons from 2004-2007, a 32-game regular season winning streak that has stood the test of time. The crowning achievement of Cooper’s incredible coaching tenure came in 2006, when he led the Divas to an undefeated 11-0 record and an NWFA national championship. For his efforts, Coach Cooper was given the NWFA’s Coach of the Year award.

In eight seasons as the Divas’ head coach from 2001-2008, Ezra Cooper compiled a record of 57-16. After two years away, the Divas lured him out of retirement as the team’s defensive coordinator for the 2011 season. That season resulted in a 7-2 record and yet another division title for the Divas.

But for all his records, victories, and accolades, Ezra Cooper’s influence on the D.C. Divas franchise extends far beyond mere numbers. Cooper became a father figure to many of his athletes off the field. He was a trusted advisor, a mentor, a teacher, and a friend…and not just about football-related subjects. Cooper’s players looked up to him for guidance in all areas of their lives, and their coach was always there for them with whatever they needed.

The trust and bond that Cooper developed with these women off the field showed on gamedays. For many women, Coach Cooper was their first head football coach, the first person who introduced them to the game of organized football and helped develop their skills within it. He taught them the nuances of the game and how to play a sport that, for years, had been off-limits to them.

“Women have been denied access to the game of football for their whole lives,” Ezra Cooper said in 2004. “And now that they have that access, I think they feel like whatever time that they have left to play it is precious. And they tell me that. The opportunity came too late for generations of women, but the players on the Divas are going to take advantage of whatever time they’ve got left.”

That perhaps stands as Coach Cooper’s final and greatest lesson…that whatever time we have left is precious. Like the careers of so many of his athletes, Ezra Cooper’s time in women’s football was far too short, and he was taken from us far too soon. Coach Cooper’s leadership, commitment, and devotion to the D.C. Divas were the very soul upon which one of the greatest franchises in women’s football was built. The sport has lost one of its greatest coaches, a mentor and a friend.

The D.C. Divas support the Cooper Family Fund, and you can help by contributing to the fund online. The Coopers do appreciate all of your support, both now and in the future. 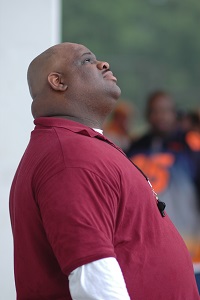 A Eulogy for Coach Cooper
By Allyson Hamlin

I can hear Coach telling me right now, “Let’s just run behind Gayle [Dilla] and get outta here.”

My name is Allyson. Coop called me 19. I am extremely honored to be standing here.

Fourteen years ago, Jill graciously lent Ezra to us so he could pour his passion for football into a group of clueless, wide-eyed women, who would soon be called the D.C. Divas. At the time, we had no idea just how important this team would become or how it literally would transcend our lives, but Coop knew something we didn’t. Not only did he have vision, he was patient. He believed in us long before we did, and in the words of “Daddy Nat,” we were truly bamboozled. The truth is, Coach Ezra Cooper had us at hello.

He quickly instilled the “Diva Way”…pride, class, sportsmanship, loyalty, integrity, and team. And over the next eight years, Coop would take us on the journey of a lifetime. He was a fierce leader, was wise beyond his years, had endless compassion, and more incredibly, had an egoless heart. He had the ability to not only bring out the best in everyone, but he made every single person feel important. We all found a new sense of confidence, which carried far beyond the football field, but he was quick to reel us back in before it became arrogance. We forged lifelong bonds and most of us would say it was the greatest team we had ever been a part of. He would always tell us, “It’s not about the name on the back…it’s about the name on the front.” We all bought in, and it translated into one of the most dominant franchises in all of women’s football.

As our head coach:

Pretty remarkable numbers! However, his legacy will not be about the wins, the division titles, or even the national championship. What he left us with has nothing to do with the scoreboard and everything to do with the man he was. He was a coach you would run through a wall for and a friend you would take a bullet for. We will never forget his unparalleled pre-game speeches; leading us on the field; swaying with his eyes closed during the national anthem; his big gentle hands swallowing our helmet as he looked us dead in the eyes and said, “Good job, lady”; his wisdom and patience; his smile; giving and teaching us the greatest sport on the planet; and most importantly, giving us each other, a team in life we will have within us forever.

The fact is he left a legacy for each and every one of us – a father, a husband, a son, a brother, a friend, a coach – a kind, gentle, and compassionate soul who was steadfast in what he believed in and left his mark on every person he came in contact with. He was a true template on how to live and how to love. Knowing him made us all better and he motivated us to be better. It is now our chance and duty to return the gift and carry his legacy on. As much as we hurt, we are fortunate to have known him. I hurt for those who never got to know him, and most of all, for the core of his heart – Jill, Payton, and Molly. We must keep his spirit alive, while we nurture them through this difficult time. I know that is all he would ever ask for.

Coach, thank you for you. We love you and will carry you with us forever. I know Walter Payton is waiting for you. Together you can talk about your lowly Bears and ‘Skins and run together in the heavens forever. I love you.