The best-attended game in D.C. Divas history wasn’t even a game that counted in the standings. On November 22, 2004, the D.C. Divas took on a men’s football team assembled by the local Sports Junkies radio show, with proceeds from the game going to charity. Over 8,200 fans packed into the Prince George’s Sports Complex to witness the event, setting a record for attendance at a women’s football game. 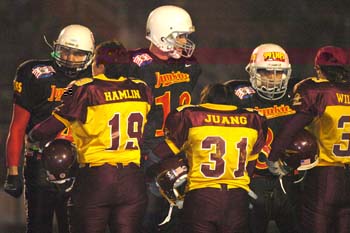 In 2004, the Sports Junkies radio team of Eric Bickel, J.P. Flaim, John Auville, and Jason Bishop were having fun talking about sports, as they usually do. But after years of talking, they wanted to leave the talking behind and personally test their sporting skills.

Taking a page from George Plimpton, the personalities on the show decided to participate in semi-professional sporting events and record their experiences for the listening audience. Perhaps the most publicized of these events occurred in 2006, when Flaim took part in a boxing match which was later detailed in the book, Chasing Rocky.

But years before that, in October 2004, the Sports Junkies turned their focus to football, and the D.C. Divas caught their attention. The Junkies threw down the gauntlet, challenging the Divas to a “Turkey Bowl” football game in late November.

The D.C. Divas had just come off of their best season yet, a 2004 spring campaign in which they finished the NWFA regular season with a perfect 8-0 record before losing in the Northern Conference championship game, 20-14. The Divas quickly accepted the Junkies’ challenge, and a game was arranged for November 22. Admission was free, but fans were encouraged to bring canned goods to benefit the charity So Others May Eat (SOME), and donations were accepted on behalf of Concerns of Police Survivors (COPS).

The lead-up to the game was filled with weeks of trash talking between the two sides. Several Divas players, including star running back Donna Wilkinson, made multiple appearances on the Sports Junkies radio program. The men of the Junkies were determined not to suffer football defeat at the hands of women, while the Divas vowed to prove that women’s football players could hold their own, even against men.

With their pride on the line, The Sports Junkies assembled a legitimate team of athletes. They recruited sales and advertising staff members, many of whom far outweighed the Divas’ players on the offensive and defensive lines. The Junkies also put together a coaching staff that included Super Bowl champion cornerback Tyronne Drakeford and former University of Maryland and Indianapolis Colts linebacker Ratcliff Thomas. 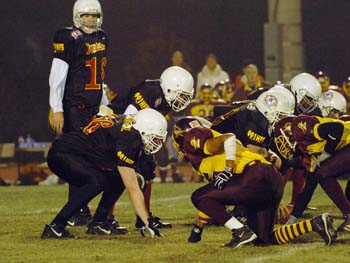 The two teams faced off on November 22, 2004, at 7 PM at the Prince George’s Sports Complex, the home field of the Divas. Although weather conditions were far from ideal – temperatures hovered around 50 degrees and a steady rain soaked the field – over 8,200 fans showed up for the contest. It is the largest number of fans that have ever come out exclusively to watch a women’s football game.

The game itself was entertaining and competitive. After a scoreless first quarter, the Junkies got on the board first with a touchdown run and seized a 7-0 lead. The Divas’ offense responded, and with 1:35 remaining in the first half, Divas quarterback Allyson Hamlin fired an 18-yard touchdown pass to wide receiver Nikki Williams to cut the Divas’ deficit to 7-6. 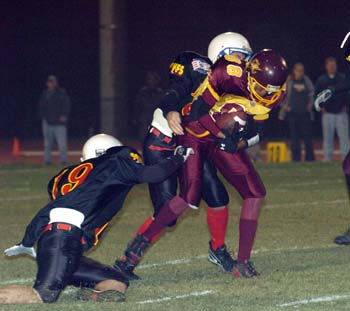 The Divas were soon demoralized, however, when a big pass play put the Junkies in business, and they scored on a quarterback keeper with 47 seconds remaining in the half to go ahead, 14-6, at halftime.

Not even a halftime speech by Washington Redskins legend Darrell Green could help the Divas in the second half, as the sheer size and strength of the Junkies’ linemen began to grind the Divas down. Two second-half turnovers ultimately sunk the Divas. Trailing by just eight points as the second half began, Hamlin was sacked and fumbled the ball deep in D.C. territory, giving the Junkies great field position. A touchdown run two plays later gave the Junkies an insurmountable 21-6 advantage.

The Divas’ offense would be unable to get the team any closer, with the Junkies getting constant pressure in the Divas’ backfield. The Junkies added an interception return for a touchdown late in the game to secure a 28-6 victory. For a complete recap of the game, click here.

Eric “E.B.” Bickel was named the game’s MVP for the Junkies. “The Divas played hard, but I think the size and strength eventually won out,” Bickel acknowledged. While it was ultimately a loss for the Divas, the team earned the respect of their competitors and proved that women can play tough football. “We played hard and worked through the size disadvantage to gain their respect,” Wilkinson said. “That was our ultimate victory.” 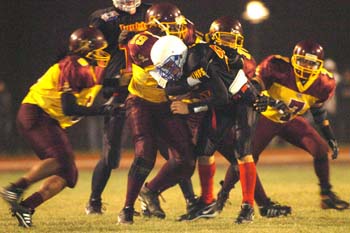 John “Cakes” Auville of the Junkies put the event in perspective. “It feels great to win, but we’ve got to give some props to the Divas. They were a tough battle,” Auville remarked. “The charities is what it’s all about, win or lose. Of course we wanted to win, but we’re helping out a charity that’s going to put some food on some underprivileged people’s table. That’s the really important thing. This is just a game.”

Ten years later, the D.C. Divas are still going strong and awaiting a rematch of their Turkey Bowl defeat in 2004. The Sports Junkies, on the other hand, appear to have hung up their cleats. “I’m gonna retire and frame my jersey,” Auville laughed.