Nate Randolph, 56, a licensed physical therapist and the trainer for the D.C. Divas of the Independent Women’s Football League, died Feb. 11 when the car he was driving slammed into a parked tractor-trailer on Interstate 295 near East Capitol Street NE. Family members surmise that he fell asleep in the pre-dawn hours and drifted out of his lane.

Mr. Randolph became the volunteer trainer for the Divas when one of the players, Carrie Pecover, was referred to him for treatment in 2004. She recommended him to teammates, and soon, by word-of-mouth, he had become the unofficial team therapist.

When his daughter, Natalie Randolph, joined the Divas as a wide receiver after a standout track career at the University of Virginia, “Daddy Nat” became the team’s unofficial trainer as well. He provided treatment and rehabilitation for team members for free.

“He was at every practice, every game; he took care of the water, did all the taping,” said his daughter, a science teacher and football coach at H.D. Woodson High School in the District. “Some girls wouldn’t let anybody but Daddy Nat tape their ankles.”

Women players get injured just like men, but they handle it better, Mr. Randolph told National Public Radio in 2006.

“They’re tough,” he said. “They get their injuries and they wanna play, and they get up, they get taped up, and they go back in the game, or they come back to practice.”

Divas General Manager Rich Daniel recalled a 2005 game against the Cincinnati Sizzle when receiver Monica Livingston got her foot caught in the turf and twisted it at a 180-degree angle. It was an injury as horrendous, Daniel said, as the broken leg Redskins quarterback Joe Theismann suffered in 1985. He’s convinced that Livingston would have lost a limb had Mr. Randolph and a volunteer team doctor not been on hand to set the foot immediately. She came back to play two seasons later.

“He got involved with the team when his daughter joined us, but he has now, over the years, hundreds of daughters, and they feel the same way in return,” Daniel said, noting that a number of team members never had a father in their lives. “Daddy Nat filled so many different roles for them,” he said.

Nathaniel Randolph Jr. was born in the District and graduated from St. John’s College High School in 1970. He got interested in physical therapy at Boston University, where he was a sprinter, hurdler and long jumper. He received a bachelor’s degree in physical therapy in 1974.

After working at Howard University Hospital as a physical therapist, he opened Allied Physical Therapy Services on Franklin Street NE in 1977.

“He was the people’s therapist,” his daughter said, noting that he did a lot of pro bono work. “He was great with people. Some patients he’s had for 20 years.”

For many years he lived on a houseboat on the Potomac but he spent almost every waking moment at the clinic. “He always had to be taking care of somebody,” said Natalie, of the District.

His marriage to Marilys Graham Randolph ended in divorce.

Survivors, in addition to his daughter, include his father, Nathaniel Randolph Sr., of the District; three sisters, Constance A. Randolph-Kelly and Mary R. Randolph, both of Hyattsville, and Jacqueline G. Randolph of Duras, France; and two brothers, Michael A. Randolph of Towson and Bruce C. Randolph of Atlanta. 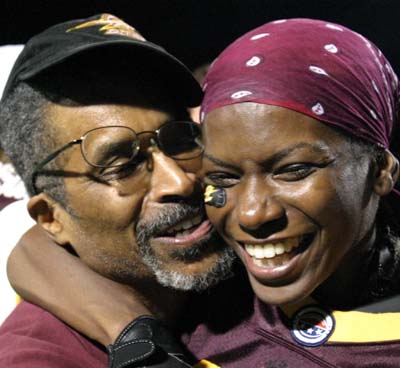 A Letter to “Daddy Nat”
By Nikki Williams

I remember so clearly the day I found out you had left us. I was sitting in the front seat of my rental car, about to pull out of the parking space of the hotel I had just checked out of. Suddenly my phone rang, and I answered. On the other end was a teammate saying, “Nik, Daddy Nat died.”

I sat there saying, “Oh God, no!” My friend, who was sitting in the passenger seat beside me, saw my face and asked me what was wrong. I replied, “Daddy Nat’s gone.” She asked, “What do you mean gone?” I said, “He’s gone…he died.” Stunned and speechless for a time, my voice shook as I choked back my tears to finish the conversation with my teammate and to gather what information I could about what happened.

Still struggling to fight back tears and trying to understand why and how, I began to reminisce to my friend who was sitting in the car with me about all you had come to mean to me and the D.C. Divas organization. I’m sorry that I didn’t have an opportunity to see you one last time, but I am comforted in knowing that you’re in a better place. You have left a void that can only be filled with the memories you gave us.

I will forever remember your smile and humor that brightened our lives.

I will forever remember your good will and tireless time given to all of us.

I will never forget what you gave of yourself to us and asked nothing in return but for us to be healthy and happy.

There is not a day that’s gone by since your passing that you haven’t been missed or thought of. And I suspect that will always be. But once again I am comforted in knowing that you are in a better place, with a loving God who decided (why, we’ll never know) that He wanted you now with Him. Your memory will live always through those of us who knew and loved the man we called “Daddy Nat”.