One of the first questions people ask when they hear about the D.C. Divas is, “Why would women want to play full-contact football?” Here are five reasons women love playing this great sport! 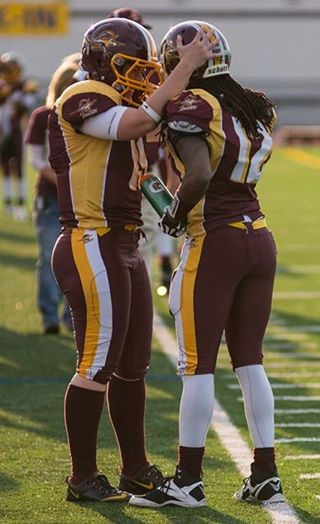 1) Football is an American Sport: If baseball is America’s national pastime, football is America’s national obsession. The NFL and major college football are two of the most popular sports leagues in the United States. Football is a terrific, uniquely American sport that challenges athletes physically and mentally. After playing football successfully, many athletes claim that everything else in life seems easy by comparison. That challenge is what draws so many people – men and women alike – to the great sport of football.

2) Football is a Team Sport: Many women have athletic success in individual sports, but athletes who have played team sports will tell you that there’s nothing quite like being part of a team! Women’s football gives athletes a chance to be part of something bigger than themselves and to play alongside other great female athletes.

3) Football is a Physical Sport: One of the main concerns recruits have about playing football is the risk of getting hurt or injured. Moreover, there have been major news stories recently about some NFL and major college football players, mostly from the 1970s and ‘80s, who are suffering from health issues due to repeated concussions they sustained during their careers. The seriousness of their stories cannot and should not be minimized or trivialized. 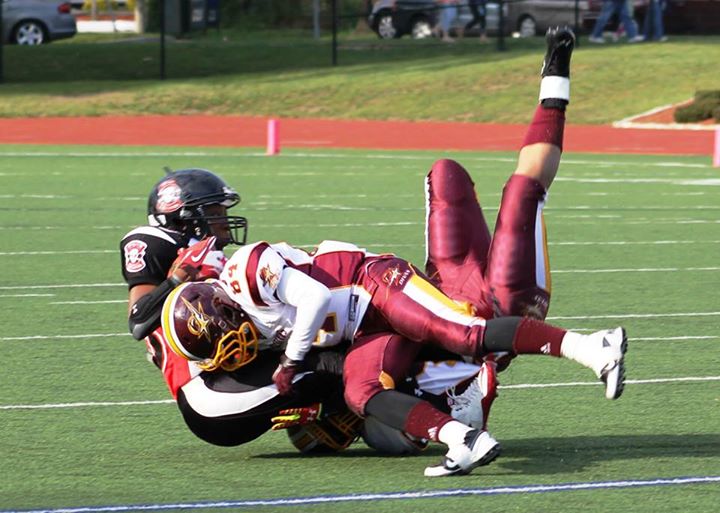 Make no mistake…football is a physical sport. Athletes in women’s football take the game seriously and often deliver punishing, painful hits. Torn ligaments, sprains, and even concussions do happen. However, if an athlete is coached to utilize proper tackling techniques, she can drastically reduce her injury risk. In addition, the improvements in modern football equipment and the increased attention now being paid to concussions and its effects have dramatically improved the safety of the sport. Too many women let the stories they hear about injuries to elite men’s players cloud their perception of football and keep them from participating in a truly rewarding and empowering sport.

When those fears are put aside, many women realize that the ability to hit is one of the greatest things about football! Football is one of the few sports that allows athletes to let out their aggression and embrace physical play without fouling out or being disqualified. Most women find that the rush of playing full-contact football is addictive and eventually come to welcome the rugged nature of the sport.

Football gives women a chance to compete on a national stage after college. Women’s football is a nationwide sport, with dozens and dozens of teams in cities all across the United States. It provides a unique opportunity for female athletes to continue competing at an elite level, even after their college careers are over.

5) Football is a Women’s Sport: Why should you play women’s football? Simply put…because you can! Football was closed off to women for decades, because it was historically considered a “man’s game.” Even today, the stereotype of associating football exclusively with men persists, despite having been shattered in virtually every other sport, even physical sports like hockey, boxing, and mixed martial arts.

Today’s women’s football players are pioneers, taking advantage of an opportunity to play football that was denied to many women before them. They show the world that anything is possible and that women can do absolutely anything they set their minds to. Women’s football players serve as role models in their community, setting an example for young girls to look up to when they pursue their own dreams.

“Do you know what my favorite part of the game is? The opportunity to play.”
– Mike Singletary, Pro Football Hall of Fame linebacker 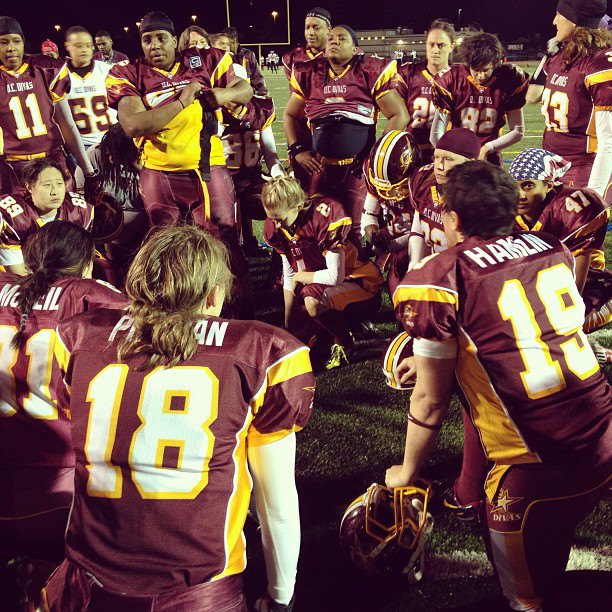 6) Large, Experienced Coaching Staff: The D.C. Divas appreciate the value of great coaching, and the Divas have assembled a top-notch staff of talented, experienced coaches. Most of our male coaches have experience playing major college or semi-pro football or coaching at the high school or collegiate levels.

Our female coaches include several longtime veteran players of the Divas, who understand the nuances of women’s football. With their unique combination of varied experiences, our outstanding coaching staff is a major part of why the Divas continue to build upon their championship tradition.

7) Excellent Facilities: The D.C. Divas know that if you want to have a good practice, you need to be put in a good environment. We regularly hold practices at high schools that provide all the equipment, like blocking sleds, that a typical high school team would have.

The Divas have even held pre-season training camps at locations like the University of Maryland’s historic Cole Field House. We work hard to create the kind of productive practice environment that is critical for developing a team into a powerhouse.

8) Outstanding Gameday Coverage: The D.C. Divas have a reputation for providing some of the best gameday coverage in all of women’s football. We Twitter-cast all of our games; from kickoff to the final gun, we report on score updates, possession changes, and other major plays going in on the game, live, as they happen.

Your friends and family can follow the game live on our social media accounts and cheer for you and your team online, so they’re always in the loop about how your game is going. Many of our recent games have been accompanied by a live video or free live audio stream as well.

9) Fun Team Events: The D.C. Divas have been a part of numerous incredible events over the years. Divas players have been invited to the White House Easter Egg Roll, been recognized on the floor of the Maryland House of Delegates in Annapolis, and marched in the St. Patrick’s Day and Fourth of July parades in Washington, DC, just to name a few.

The Divas also strongly believe in being a positive influence in the national capital region. Members of the Divas have played a very active role in the community over the last 17 years, helping to raise thousands of dollars for various community projects.

10) Supportive Family Atmosphere: The D.C. Divas have one of the largest, most tight-knit sisterhoods in women’s football. The Divas have over 500 living alumni players, coaches, and staff, and we appreciate every single person who wore the burgundy and gold – even if she played just one season. The D.C. Divas are one of the only women’s football teams with an active alumni group, and the D.C. Divas Alumni Association has over 250 card-carrying members – with more joining every week!

We work hard to recognize the great players of our past and to honor our history. Every season, we have a Homecoming game in which we invite former Divas back as a group to reunite with their old teammates. Honoring our past is also why we started the D.C. Divas Hall of Fame in 2015…to recognize the greatest players and contributors to the Divas organization.